This image goes back to my roots of wanting to shoot people. Although I find it somewhat contrary to the work I am doing now, I love shooting people. I love the studio, love to create moods, sets, lighting, contrast. These are the things that make me tick, and as I progressed with this particular project, I began to find myself wanting to interact with the living again. Wanting, so desperately, to be part of a collaborative effort that went beyond myself, somehow reaching out.

I have several contacts in the hair and make-up as well as modeling arenas and I threw out a request for anyone willing to do something above and beyond for the sake of art. My favorite make-up artist responded that she was very excited about the concept, and I found a model that had been wanting to do some other work with me who was willing to do both the Hollywood Glamor shot that she wanted as well as the shot that I wanted.

The trouble is that I wanted to do several things. I wanted to show an escape, and evolution, the embodiment of what it is that I am trying to accomplish. I wanted to show that part of the process that is inherently human, that is natural and organic and materially relevant to life. I am not fascinated with decay because I am morose, but rather aware of transition as demonstrative of evolution. I embrace change. I yearn for it. I want to be better and brighter and more influential tomorrow than I was yesterday. I want to see the world from a different perspective, embrace my mistakes and my obstacles as part of my greater whole. I don't yearn for eternal youth, just the common sense to learn from my mistakes, to trust my instincts, and to continue to evolve. 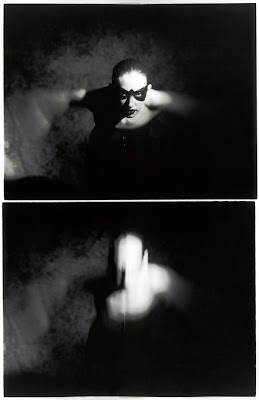 This image is the visualization of that drive. This image works on two levels for me. First, she is in motion, alive, evolving before our eyes. Second, she is representative of the founding principle behind the work of the spiritual transition from this world to the next. This is why the title is Crossing Over. She is becoming something different. She embodies both the momentary and the ultimate transitory sentiments.

As a side note, I shot primarily digital with this model, but I also brought out the 4x5 and shot several different images and poses. In this pose, I shot only these two shots. Printed together on one 16x20 sheet of paper, these images become the statement that I was trying to make. Below are some of the digital images I also liked from the shoot, but the image for the project is the one from the darkroom. 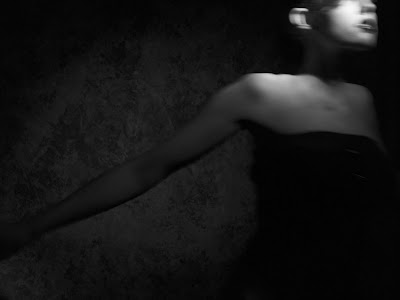 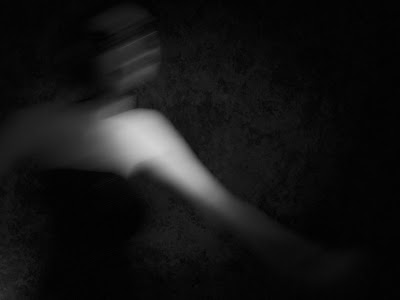 Posted by Moose Tucker at 11:55 AM No comments: