Perhaps it is About the Wait

There are so many times in life when everything seems to go straight to hell in one fell swoop. Times when the acts of walking through your day, of getting out of bed, of breathing seem overwhelming and impossible. I have had a lot of those days recently, for a multitude of reasons. But yesterday I received several things that I needed desperately.

The first was a call from a friend who is convinced that I can still positively affect the world. Not just my sphere, but the world. The second was the opportunity to chat with my father and get some of his thoroughly helpful advice. The third was acceptance of my submission to Alamy images. The last, but certainly not least, was the accidental email sent to a woman who inspires me.

The last being so important because had the accidental email not been sent, I wouldn't have felt the need to send a follow up email, and I wouldn't have gotten the response that I did this morning. A brief but lovely email from her actually thanking me for contacting her as she needed a boost while she prepares a new show and is exhausted and spent. Perhaps artistic karma does work after all. Though I wish the circumstances for it kicking in were not so dramatic. None the less, had I decided to quit, to leave, to vanish into the Costa Rican jungle (yes, it most certainly was on my mind) then I wouldn't have had that contact, wouldn't have been given the small ray of hope that maybe art really can bring the world together again.
Posted by Moose Tucker at 9:26 AM No comments:

Well, I Guess That's One Way

I used to fairly heavily believe in the concept that everything happens for a reason. Even to a highly superstitious level. (Though, clearly, you must all recognize my superstitious nature by now.) But recently I have been extremely skeptical about the intentions of God or the Universe or Fate or whatever you want to call it. I am, after all, not finding any success in some very elemental parts of my life.

Let us step back for a moment. In the book "The Artist's Way" the concept of the Universe supporting you once you begin to find your artistic/creative path is woven into the mentality that you should free yourself to be a creative individual. It is this mentality that lead me back to photography. This mentality that convinced me I could pursue a Master's degree. But the concept also contains a belief that doors will begin to open, you will meet the right person at the right time, be given a chance to take the next step, find the next project, and make a difference. I know it may seem like a philosophy of manna from heaven, but the book makes no excuses for you and requires hard work and dedication to follow suit with recovering your artistic self.

Hard work I am good at. Pursuing the next project, continuing to follow the signs, allowing myself to be open to the possibilities - those things I can do with ease, now. Finding the right people? Being presented with the right doors? Those would be the things I seem to be having trouble with. I applied for a job in an amazing school, had excellent communication, positive feedback, was scheduled for an interview, and then they hired someone else. Before I even had the chance to introduce myself. I have been rejected by several magazines for several articles now. I have yet to sell a fine art print. Hence the overarching question of whether or not this path is right, or if there is a higher power, or a driving force, or any sort of reward for those who are persistent, dedicated, authentic, and honest.

Today I was thinking about expanding my interaction with the artistic world at large. There is one woman in particular that I have been fascinated with since I was first introduced to her work a couple of sessions ago by Tim. Thinking about being the operative language. I wanted to start conceptualizing how to contact her. What I should do, what I should say, how I should go about communicating without gushing, how to introduce myself without sounding arrogant, etc., etc. Instead, however, I opened an email to begin a draft to her that I could puzzle over and peruse for the next several days and, out of nowhere, my computer, evil little devil that she is, decided to send the email with a subject line that had two words. Only. Nothing else.

Great. So, I decided that I would test this whole theory of "everything happens for a reason" and I decided to send her a real email. One that apologized for my lack of technical abilities (hence the first email being sent) and that also introduced myself, said hello, and explained that I find her to be inspiring. I feel like an idiot.

So, I guess we will see what the Universe has in store, if anything. Keep your fingers crossed.
Posted by Moose Tucker at 4:47 PM No comments:

I have reworked my website to better reflect the work I am actually doing now. Although I may be a capable glamor photographer, it is not what I wish to do. It is not what I hope to be recognized for. The black and white work that you have seen here, the work on my updated site, that is the work that you should associate with me. Now and forever. It is who I am.

Check it out here: Amanda Quintenz Photography.
Posted by Moose Tucker at 10:37 AM No comments:

It has been too long since my last installment. Much has actually transpired artistically, but for the sake of you, the audience, I must retrace my steps back to the next important step in my MFA project evolution.

At this point in the academic sphere we were being asked not for creation of specific assignments, but to bring to the class whatever we wanted. There was a certain amount of expected participation, I suppose, but to each his own. We were asked to bring whatever imagery spoke to us, whatever imagery we found to be on track, in line with the path we had each chosen, even if only for the moment. 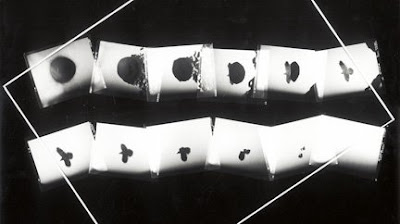 This is the image that I produced to bring in. Even though I have no intention to be at all deceitful or selfish in the production of this blog, I am not going to specifically reveal the particulars of this shot because it is far more evocative if you let your mind create its own story. It was in the presentation of this image that I learned several things about myself, and several things about the way in which people view images.

One of the elements of this particular image that has become a hallmark of all my future work is the way in which it is produced. It is, not unlike Self Portrait V, a series of accidental intentions that have lead to the ultimate image. For one, it is also a sort of test. I was testing the lighting to see if I wanted a hard edge or a soft edge on the frame. I found that having both in succession creates a sort of landscape in which the raven has been given sky and context. I also wanted to fit all of the negatives under one piece of glass, but only had this small piece of glass, which creates the rectangular graphic element that has become a sort of internal frame and point of interest that, on the whole, people seem to respond to and like in this image.

One of the things that I learned about being around photographers is that they recognize part of the inherent nature of the image that can only be realized by someone who is familiar with how silver gelatin prints are made, and how an image composed in this way is unique. No two images that I make in this way in the darkroom can possibly be the same. The reason for this is that each time I create an image in this manner, the negatives have to be placed on the paper by hand, the glass laid on top of them, which in and of itself can cause tiny drafts of air that move the negatives at the last moment, and of course the individual burning and dodging, which has to be determined once the light is enlarger is on, since I cannot see the individual parts until light is moving through them. Each image is entirely unique, until such a time as it is scanned to be reproduced in a forum such as this. But my images, my intent, is to continue using the traditional medium, because it cannot be forgotten that the silver gelatin print and the digital print are two very different creatures with very different ancestral lines. Distant cousins, perhaps, but they have been given too much power over each other. They are both photographic in the sense that cameras are used, but silver gelatin prints are photographic also in their printing, in the paper that you use, the negatives that capture the light, and the darkroom in which you create the final product. It is a much greater sense of painting with light, in every stage of the process, and should not be so easily compared to digital.

Digital has many advantages over certain aspects of photographic needs in the commercial, and even consumer, world. My argument, however, my belief, is that you cannot forget the equally diverse advantages of the silver gelatin print. It depends partially on where you are coming from artistically, what your goal and purpose are, but also your intended outcome, and, most importantly to me, why you create the imagery. For me it is a process of creation, of organic communication and growth. For me, it is imperative that I maintain my alchemist's roots, because it is as direct a communication of light, vision, and concept onto paper as any other medium I have found. There is great beauty in that communication, and it was through discussion with my peers that I determined that.

I will also never forget this particular class because of the comment that Tasha Moore made after there had been some discussion of the image. She asked me if it was intentional that I had laid the negatives down in a way that was, in itself, reminiscent of the flapping of a bird's wings. I remarked that I had not noticed that before and had merely placed the negatives as they seemed fit to be placed. It was through her that I also realized that there were things in my images, things that make sense and speak a great deal about who I am, that I am not aware of. It was also the last class that Tasha attended. The loss of her voice in the program was felt reverberating through the halls for many months to come. She is an intellect and an artist that I hope to reconnect with someday. But it was the cumulative voice in the room that day that, in many ways, started the greater progress of my project. It was determined with almost certainty at that point that my final show would be printed by hand in the darkroom.
Posted by Moose Tucker at 7:49 PM No comments: