And so we return to the work. This piece was originally inspired by a question from one of my classmates in response to the work From Dust previously discussed on this blog. The question was "why don't you use ash?" I know it may seem like a simple question, but the concept of the blackened phoenix rising from flames became a burning image in my psyche (no pun intended.) I was consumed with it, because fire is perhaps one of the most immediate and irreversible forms of degradation and corrosion that exists.

I was immediately faced with two problems. The first was how to get something that was burning to resemble a raven, the second was, quite simply, the actual burning. I was not afraid of using the symbolism of the phoenix in place of the raven for this image, though I was a little sad to be straying from the original concept so early. But I knew that I wanted the imagery to separate from the background, and flame being a light source (emitting instead of reflecting) I knew that I wanted to shoot in a completely black environment. This made the actual shooting more feasible because it allowed me to go outdoors where I could clear away anything flammable and shoot at night.

To get the semblance of the bird (phoenix initially) I carved a piece of this wood into the shape of wings and a head, with wood curls making up the more intricate feather tips. I drove a four inch nail into the carving and attached that to a light stand that I knew would be out of the visible range of the film as it was going to be illuminated solely by flame. I then set up a flash to illuminate the front of the wood to allow me to see the elements that were burning, and a flash behind to illuminate the smoke. I took a couple of test Polaroids to see where I liked the positioning. I then shot the first few frames with just the flashes and wood and no flame. The pyromaniac in me came out to play and I tried to light it all on fire at once. That was a miserable failure, but once the flame on one side was going strong I shot the role until the flame had petered out on the other side, the remnants of the bird form now curled and blackened around the nail. When I went to retrieve the remains, they melted at my touch and vanished.

Because the flame had devoured the wood in a chaotic and not nearly consistent manner, I assumed that this would turn into a test roll and that I would have to reshoot. I developed it none-the-less, pulled it out of the tank, and decided to print a contact sheet just to see what I was dealing with. Providence, it seems, stepped in again. The Polaroids had been appropriately exposed, as the Tmax or Tri-X that I usually would have used would have been. For the first time in practice, however, I used Acros film, whose main obstacle is that the ISO rating of 100 usually falls in closer to 32. So, I had a bunch of underexposed pieces of thin film with various portions of the intended glorious phoenix captured.

Pieces. This would be when the wheels in my mind started to turn and my eyes brightened. It would also be when I frantically ran to James Dewhirst's desk to see if he had any tape. I created what I had wanted from the beginning, the glorious bird aflame in flight in the dead blackness of night, from the pieces that I had unwittingly produced. The first stage of the final image consisted of six negatives sandwiched together with the best portions of flame from each segment. I was also now able to use the test shots of just the wood, which was immediately blackened beyond usefulness when the flint struck fluid. All of them together created the white phoenix rising in a pool of black. It was the perfect negative for my raven To Ashes. And since I wanted that phoenix to be a raven so badly, I contact printed through the paper to create my third black bird in the series of Organic Murder.

This is the resulting image. 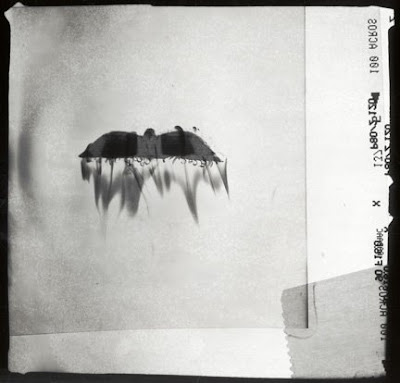 Posted by Moose Tucker at 9:26 PM No comments: